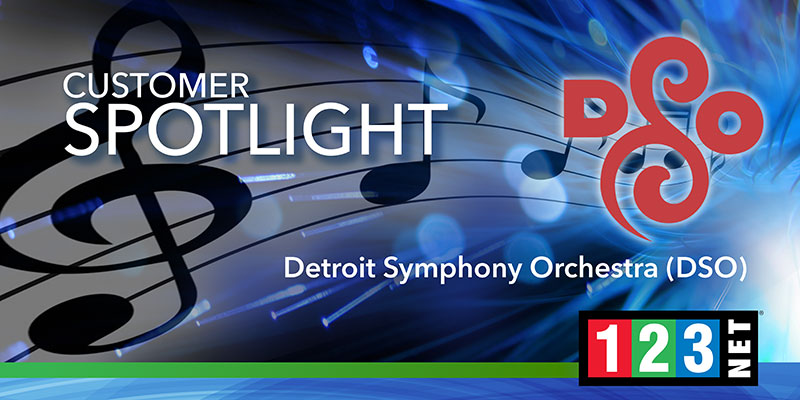 The Detroit Symphony Orchestra was looking for a cost-effective, dependable network with personalized service to support their regular, global webcasts.

123Net worked with the DSO to provide a redundant network to support webcasts and website services.

As a leader in classical music, the Detroit Symphony Orchestra’s mission is to “embrace and inspire individuals, families, and communities through unsurpassed musical experiences.” They feature international guest musicians, create educational programs for youth through their Civic Youth Ensembles and Educational Concert Series, perform within the community at events like “Salute to America” at Greenfield Village for Independence Day, and regularly livestream concerts for free to patrons around the globe in episodes called “Live from Orchestra Hall.” The DSO focuses its energy on reaching music lovers and musicians of all ages around the world.

To continue to make such a widespread impact, the DSO needed a reliable, stable network and phone system backed by a team who values the local and global communities they serve.

The Detroit Symphony Orchestra was using one major carrier for Internet and another for voice services; however, they weren’t receiving the customer service they expected from either company. When the services they had weren’t running as expected, they were often given the run-around instead of a straight-forward answer and fix. As the only American orchestra livestreaming concerts for free online, the DSO was concerned that staying with an unreliable network would lose them the ability to provide these concerts.

When looking for a new Internet service provider, The Detroit Symphony Orchestra’s IT Manager, Jody Harper, focused on finding a company that could provide a reliable network at an affordable cost for the non-profit.

In moving to 123Net, the DSO was able to consolidate both their Internet and voice services to one vendor, simplifying billing and management tasks. They began their partnership with 123Net by implementing a fixed wireless and PRI circuit. Impressed by the reliability and care they received, they knew right away that they’d made the right decision. “They really took an interest in me and the organization,” Harper recalled.

Today, the DSO continues to use the original PRI circuit they started with and keeps the fixed wireless as a backup to the newer fiber circuit they have with 123Net. Harper noted that they never had any issues with the fixed wireless, and if there was an issue with the network, 123Net’s support team jumped in right away to put a temporary solution in place while fixing the underlying issue quickly. The consistency in fixed wireless convinced them to broaden their services with 123Net’s fiber. Harper commented that running their live webcasts was a major factor for the DSO, in part because of their global audience. If they were ever brought down by connectivity issues, they would potentially lose a large part of their following. Using fiber, with a failover plan via the fixed wireless they’d already been using, just made sense.

Since working with 123Net, Harper noticed a smoothness to network connectivity that had been lacking with other providers. Gone were the days of sitting on hold and talking to techs who weren’t familiar with the services they were using. With 123Net, the DSO had a dependable, redundant network to stream concerts and maintain their website and phone lines with a support team that was dedicated to making sure the DSO’s mission came first.

“Dan takes care of me, and I appreciate that,” Harper shared, regarding his Account Manager, Dan Lang. “He makes me feel like I’m his only customer and makes my network a priority. With 123Net’s end-to-end solution, my network is easy to manage, and I know we’re in good hands.”